What does gluten free mean? An update on safe levels of gluten

Following gluten free diet is complicated enough – people with coeliac disease can be forgiven for taking a long time in the supermarket, as every label needs to be carefully assessed. Adding to the difficulty, “gluten free” means different things in different countries! We’re left asking a seemingly silly question, “What does gluten free mean?”

In most countries, “gluten free” food labels should not be taken literally. Although you might think that “gluten free” food has zero gluten, allowances are typically made for tiny amounts of gluten. These regulations are based on the idea that a very small amount of gluten (20 parts per million or ppm gluten, which is the same as 0.01g of gluten in 500g of food) is a safe level for people with coeliac disease (meaning it won’t trigger a reaction). The USA, Canada, and EU all have “gluten free” labeling laws that allow some gluten to be present in “gluten free” foods.

Why “gluten free” is different in Australia

Australian food labeling laws are based on the idea that there is no safe amount of gluten for a coeliac. In Australia, “gluten free” food must literally have zero gluten.

Here is a comparison of “gluten free” labeling laws in Australia, the USA, and the EU: 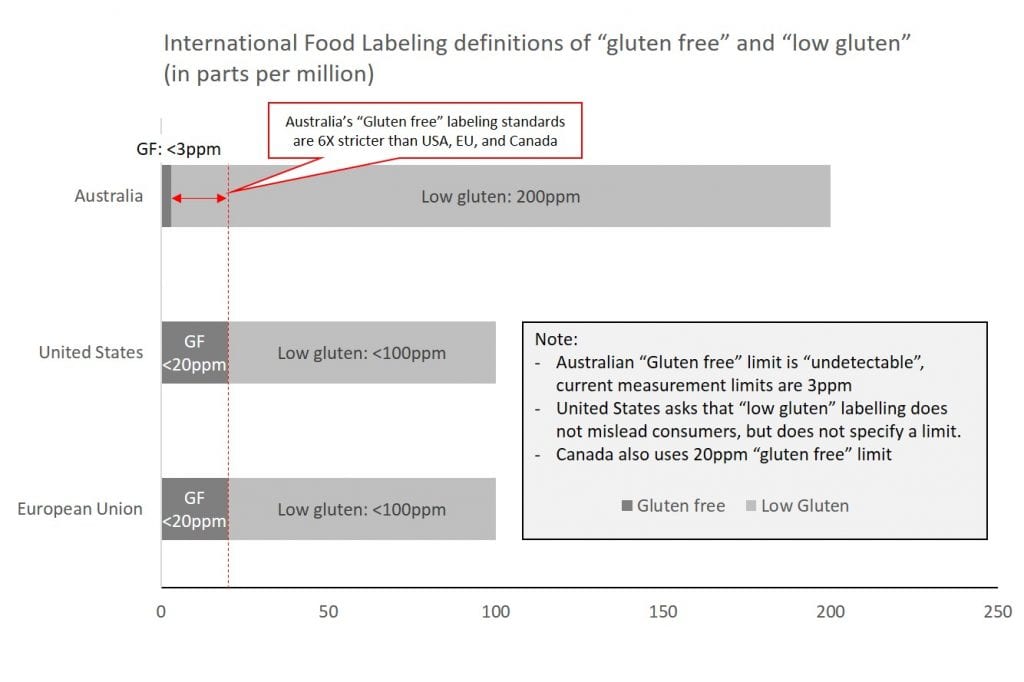 In Australia we have a “non-fixed”, literal interpretation of “gluten free”. This means that food labelled “gluten free” has no detectable gluten. Current measuring techniques can detect as little as 3ppm of gluten, so practically the Australian standards are:

However, the threshold for the “gluten free” standard depends on the precision of our testing methods, or what is detectable. So if our testing improves- detecting 1ppm of gluten, for example- then 1ppm would become the new standard for “gluten free” foods in Australia.

The Australian Gluten Free Labeling Definitions Are Under Pressure

There are downsides to having such a strict “gluten free” standard. Having a more stringent standard than the rest of the world makes it is more difficult to make or import gluten free food. This results in less gluten free food being available to consumers, and higher costs to producers trying to manufacturer gluten free food. KOOEE! is a good example – we couldn’t find “gluten free” spices in Australia, and now pay to do testing ourselves at additional expense.

Coeliac Australia has been pushing a review of the law. They recently asked a research team to answer the question, how much gluten can a coeliac safely consume? The answer came in a report appropriately named “Systematic Review of Safe Level of Gluten for People with Coeliac Disease”.

The authors of this study read through all the relevant research, sifting through 197 scientific papers until they had narrowed them down to the most relevant 18, including:

After months of reading and compiling results the research team returned to Coeliac Australia with their findings. In short, the safe level of gluten for people with coeliac disease is… unknown. According to their work, there still aren’t enough quality studies to know if small amounts of gluten harm a coeliacs health. Read the details here.

This is a bit of an anticlimax, and it highlights how much we have yet to learn about coeliac disease. Until we know for sure that there is a safe level of gluten for coeliacs, Australia will keep its strict standard. Better safe than sorry.

We hope we answered “What does gluten free mean?”. If you enjoyed this article you might also enjoy reading 3 reasons why people choose gluten free diets, and about our endorsement by Coeliac Australia.

2 comments on “What does gluten free mean? A guide to international “gluten free” food labeling”

SIGN UP ONLINE AND RECEIVE 10% OFF YOUR FIRST ORDER