Biltong is a much loved South African dried meat snack. Spend any time in South Africa and chances are you will stumble upon someone selling Biltong. Its history can be traced back over 400 years. It began (similar to jerky) to preserve meat for future consumption.

There’s a lot of passion around biltong, and we’re often told memories of South African childhoods when we’re sharing our own dried beef snacks at the local farmers’ market. Don’t miss a chance to try some biltong, recipes and techniques are often handed down from generation to generation, and the quality of these products is fantastic (much better than most commercially available jerkies).

To make biltong, whole cuts of meat are dried at low temperature. Traditionally it was done outside in the open air, although fortunately expectations for food safety have forced a few changes!

How is it made?

Unlike Jerky, Biltong is dried as a whole cut of meat, and then sliced before serving. Jerky is cut as before drying.

Biltong is marinated in spices, salt, vinegar and dried as a whole cut. The meat is dried (not smoked) at a low temperature, often using the air or a very low heat source (such as a light bulb). Today, it is made in a similar way using any method available. This includes drying with air-conditioning units, or “Biltong Boxes”, to utilise the ambient air. These are low-cost drying boxes made of wood or cardboard. They use a rack to hang strips of meat and often contain a light bulb at it’s base as a heat source. There are several online tutorials on how to make your own Biltong Box, it’s a great weekend project! Remember – if there’s no risk of fire then it’s just not authenic enough… (Kidding – be safe!). 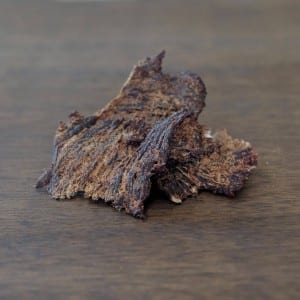 Jerky comes from the Native American word “Ch’arki”meaning salted, dried meat. Thin strips of marinated meat are dried for preservation. Jerky is a massive industry in the USA and can be found in most grocers and petrol stations globally. It is a common choice for Astronauts to take on space expeditions due to its light weight, compact, shelf stable, highly nutritious nature. Today jerky can be found using nearly any combination of meat and spices.

Similar to Biltong, Jerky was created so that meat could be preserved, reducing waste. Jerky enabled Native Americans to take food with them on their travels. Keeping livestock used a lot of resources and effort so any method to preserve meat and reduce waste was a worth its weight in gold. Today Jerky is a staple in many households.

How is it made?

Jerky is made by slicing whole cuts of meat (Lean is best) into thin strips. It is then marinated with salt and spice and then dried. There are many different types of jerky in a wide variety of flavours and meats. The drying process is conducted at a low height (higher than biltong, approx 60°C), with high humidity. The high salt content and low water activity (after drying) allows jerky to be kept for up to 12 months without spoiling.

It takes approximately 300g of raw meat to create 100g of jerky. This means jerky has extremely high levels of protein. KOOEE! uses all natural ingredients meaning no added sugar or preservatives. We pride ourselves on using 100% grass-fed beef, being paleo-friendly and gluten-free. Jerky can often be pumped full of extra sugar and nasty ingredients so be sure to check the label (or buy ours!)

Biltong and Jerky are often labelled as relatives. Both are healthy, delicious meat snacks. But they’re not identical: